An ongoing exhibition of photographs affords one the opportunity to view, all at the same time, a particular Calcutta neighbourhood or landmark building from different angles and over a period of time when it underwent significant changes.

After a lapse of several years, the Victoria Memorial Hall has made the effort of dipping into its vast and fabulous holdings to hold a fascinating exhibition of 96 photographs by Bourne & Shepherd (27 prints) and Johnston & Hoffmann, mostly of Calcutta (long, long before it was renamed Kolkata) as it looked in the high noon of the British Raj in late 19th and early 20th century.

The credit for holding the exhibition goes to Jayanta Sengupta, secretary and curator, Victoria Memorial Hall, and it was curated by Ranu Roychoudhuri, who is described in the invitation as “historian of photography and art and currently assistant professor of history in IIT-Guwahati”. These are all digitised versions of gelatin silver prints. Apart from some prints acquired later, most of these were presented by Maharajadhiraja Bahadur Sir B.C. Mahtab of Burdwan in 1938. There are besides, two daguerreotype plates and two albums in which the photographs were preserved on display.

The focus of the exhibition, titled ‘Frozen in Time: Late-Nineteenth and Early-Twentieth Century Photographs of Calcutta and its Neighbouring Areas’ (July 30-September 1) in the Queen’s Hall/Central Rotunda, is understandably the “white” neighbourhoods of Dalhousie Square, the fulcrum of the metropolis that was till 1911 the capital of British India: Esplanade, the Strand by the Hooghly river, Fort William constructed after the first such British citadel was destroyed by Siraj-ud-Daulah when he pillaged the city in its early days, and the vast open spaces of the Maidan created after clearing the dense jungles where Clive once hunted tigers before he undertook the deforestation programme. 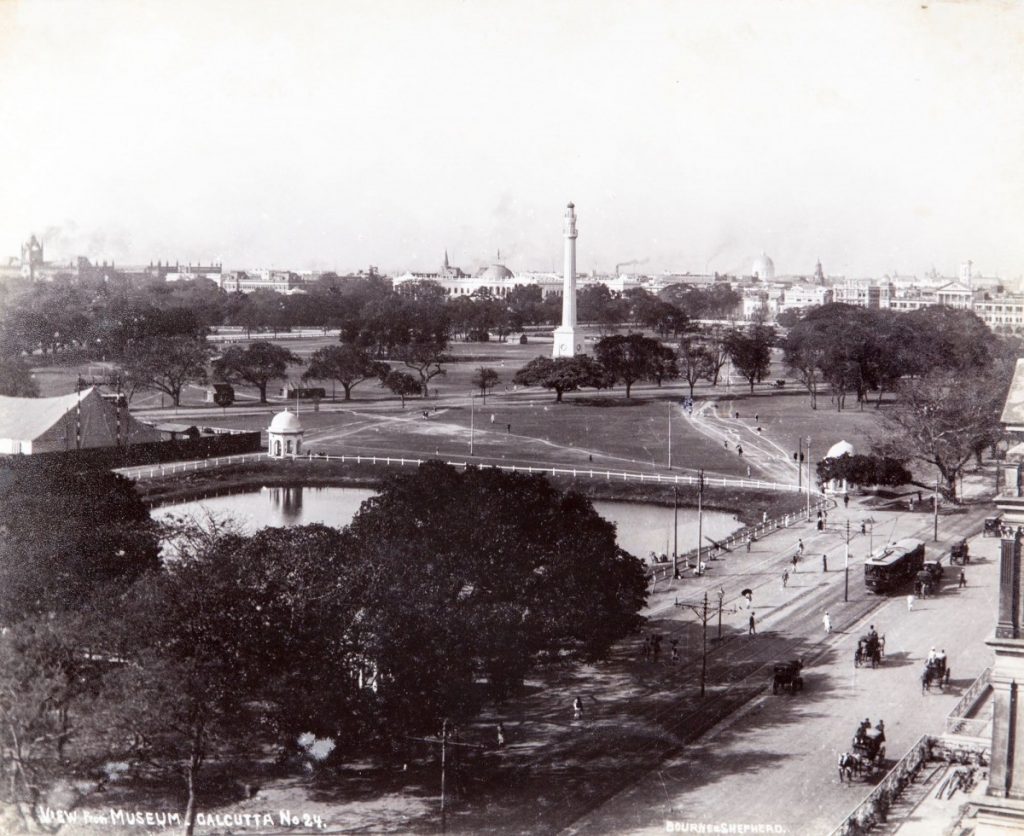 Bourne & Shepherd – A panoramic view of the Esplanade with Chowringhee Road and the tank Manohardas Tarag in the foreground. The Ochterlony monument, Calcutta high court and the dome of the Government House are visible in the distance.

Broad streets radiating from Dalhousie Square, which was once India’s administrative and commercial hub and has since been renamed BBD Bag, and rows of glistening white buildings with large windows to allow for cross ventilation, and airy verandahs shaded with louvers, often complemented with pediments, porticos and stately columns in a hybrid style that adapted classical European architectural models to suit local climatic conditions, are some of the hallmarks of what was once known as the “City of Palaces”. Indeed, the “natives”, who were rotting in the cramped and unsanitary “black town”, were being bled white to bankroll the “Second City of the Empire”.

Thanks to Facebook and “groups” such as ‘Calcutta: Photographs and Memories’ and ‘Purono Kolkatar Galpo’, many of these shots will be familiar enough to viewers. But what sets this exhibition apart is that it affords one the opportunity to view, all at the same time, a particular neighbourhood or landmark building from different angles and over a period of time when it underwent many significant changes. So they may bring timelapse photography to mind. There are besides, images of the bucolic outskirts of the city that were yet to be developed. But weren’t prime localities of upmarket Ballygunge under paddy cultivation even in the early 1920s? And doesn’t Kavi Subhash station, where the Kolkata Metro Rail line terminates in the south, eat into paddy fields encroached upon by the most hideous jerry-built high rises? So who knows when these villages with hutments, grazing cattle, fetid ponds and lean and hungry men (with a bhistithrown in) holding a pose were urbanised? 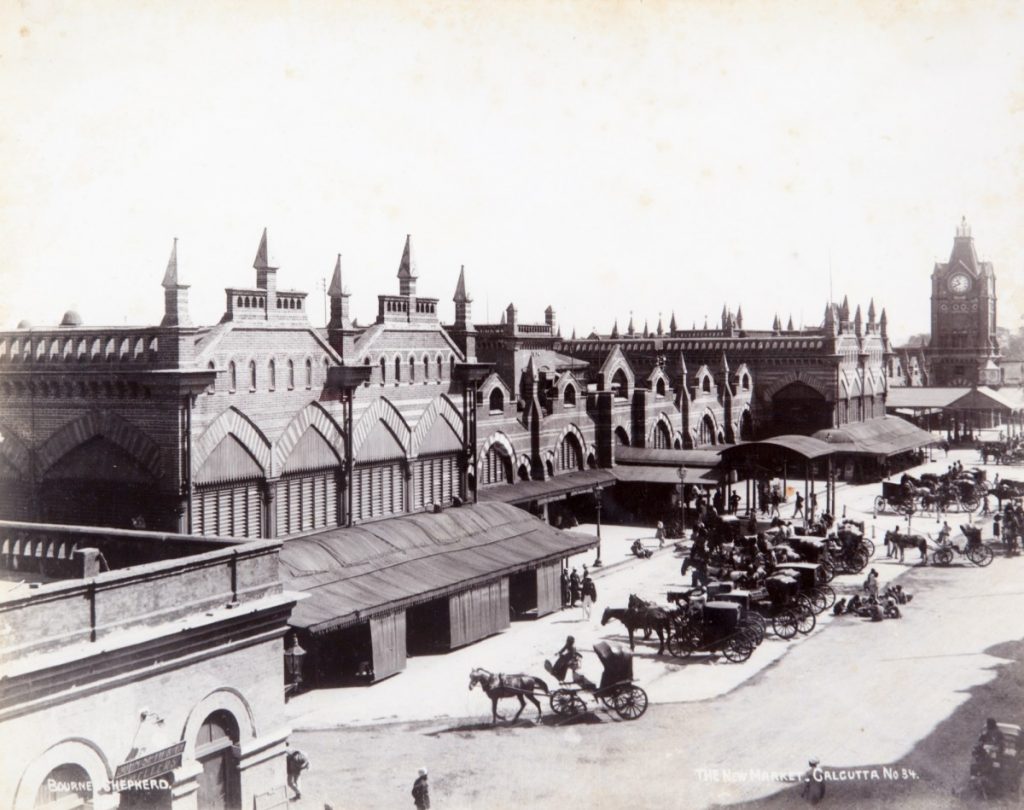 Bourne & Shepherd – An almost deserted New Market or Hogg Market as it was known then. Horse carriages wait outside. Save the posters and billboards, the market and clocktower remain unchanged although the neighbourhood is chock-a-block with human and vehicular traffic now. 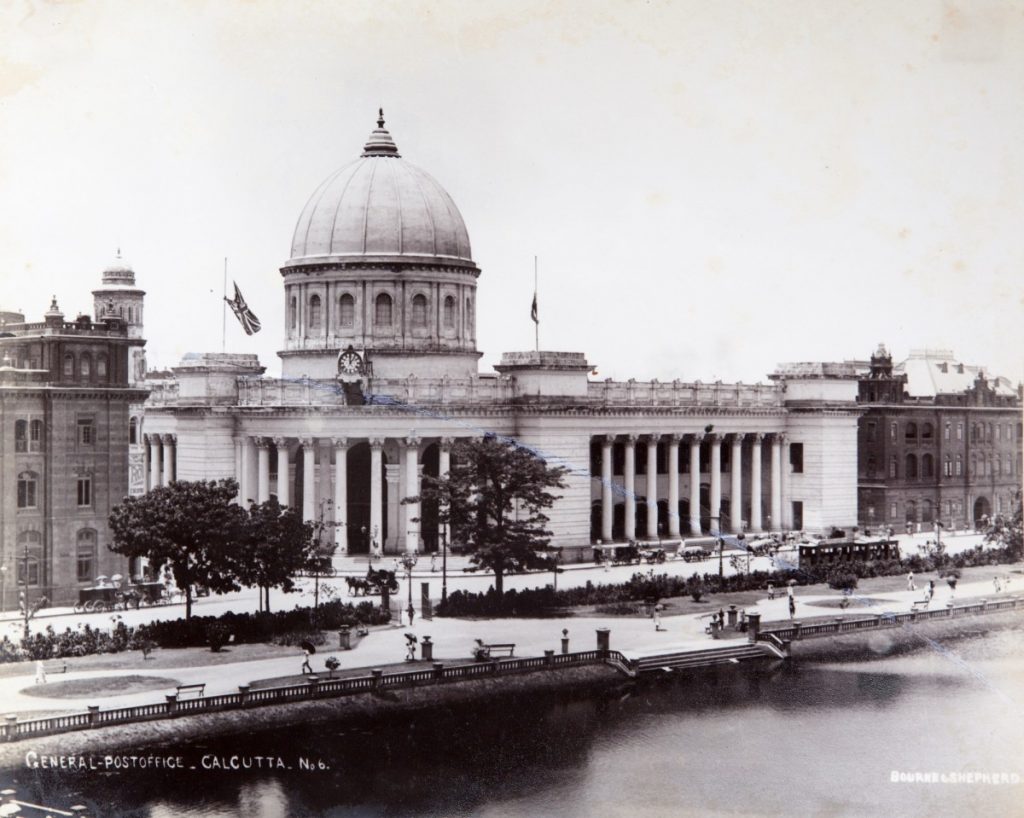 Bourne & Shepherd – The dome of the General Post Office (GPO) dominates the Dalhousie Square area, once the administrative hub of Calcutta. The Union Jack flutters on the GPO. Laldighi, the tank in the foreground, is older than the city. Its surroundings are now cluttered with the remnants of a mela that happened nearly a year ago.

In his short essay published in the catalogue of the travelling exhibition, ‘A Shifting Focus: Photography in India 1850-1900’, of a selection of 150 facsimile photographs from the British Library’s collection and organised by the British Council in Kolkata in 1996 at CIMA gallery, Satish Sharma wrote: “Photography and colonialism are inseparably related and intertwined in the 19th-century spread of power of the newly-industrialised West over the rest of the world”.

According to Siddhartha Ghosh’s path-breaking book, Chhobi Tola: Bangaleer Photography Charcha, on how Bengalis practiced photography, the oldest advertisement of the arrival and sale of daguerreotype cameras at Thacker & Spink in Calcutta came out on January 28, 1840, in the Friend of India newspaper, while the first photographer about whom there is documentary evidence was Mons F.M. Montairo of No 7, Wellington Square. This advertisement appeared on July 6, 1844 in the Englishman newspaper, and it “begs to inform the public that he is prepared to take likenesses by the daguerreotype process.”

“Samuel Bourne himself remained in India for only seven years, from 1863-70, but by the end of the decade the Bourne & Shepherd catalogue contained some 2,000 views from all over the subcontinent. While it was his Himalayan scenes that most strongly gripped the imaginations of both his contemporaries and posterity, this work formed only a portion of the firm’s output. The colonial architecture and topography of Indian cities, particularly Calcutta, was thoroughly documented as well as indigenous glories …The comprehensive nature of this documentation inevitably inspires comparison with the picturesque tours of the late 18th-century artists like the Daniells…”

That was an extract from the essay by John Falconer of the British Library that appeared in the catalogue of ‘A Shifting Focus’. However, Falconer, quoting Bourne, noted: Calcutta “was something of a disappointment, being ‘totally devoid of architectural beauty, and its immediate neighbourhood of pictorial interest’…” Yet, Bourne was impressed by the number of photographic studios operating successfully in Calcutta, although getting a likeness taken was the exclusive reserve of the rich, irrespective of skin colour, a fact that is beyond belief in this age of selfies.

Johnston & Hoffman (named after Theodore Julius Hoffman and P.A. Johnston), whose studio was at 22 Chowringhee Road, began working in Calcutta in 1882, and soon became one of the most successful studios for commercial photography in India – perhaps the second largest after Bourne & Shepherd – in the late 19th and early 20th centuries. 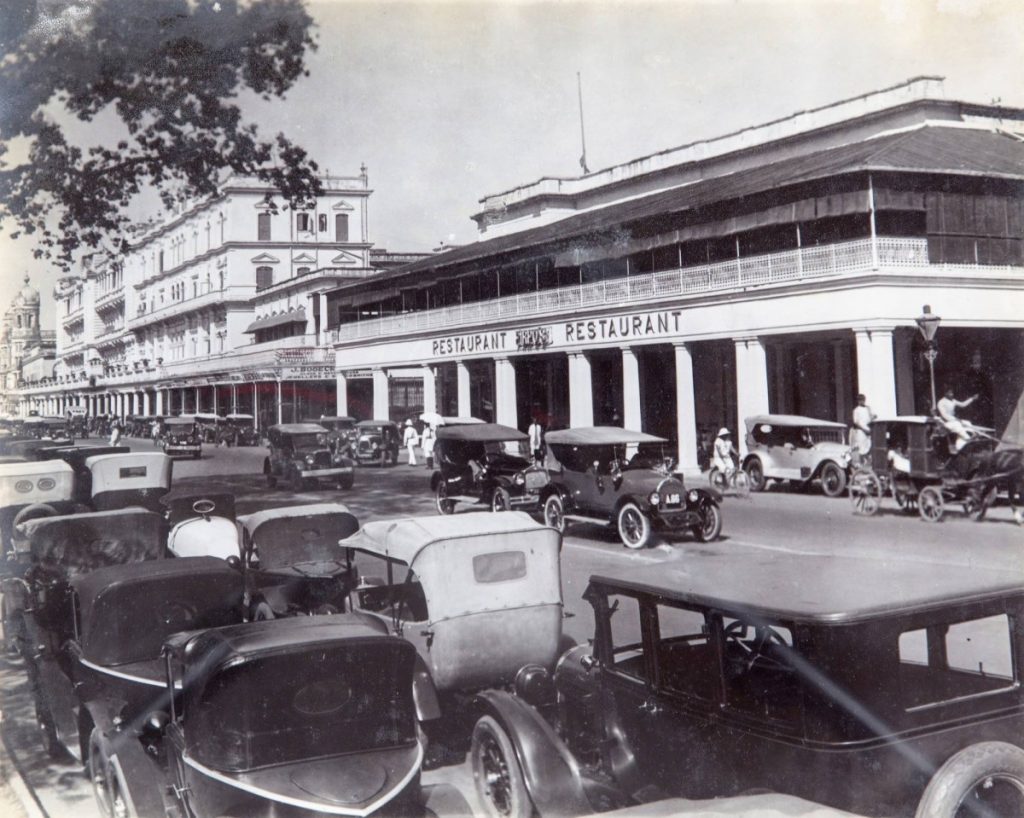 Bourne & Shepherd – Automobiles parked along once-fabled Chowringhee Road where the pleasure seekers went. Firpo’s restaurant and night club was one of the best anywhere, and adjacent to it is Grand Hotel, still synonymous with luxury. In the distance is a tower of the sprawling Whiteaway Laidlaw, a famous department store, now an LIC property named Metropolitan Building. The pavements of Chowringhee have been appropriated by hawkers and Firpo’s is now a market.

The images are relatively small but of amazing clarity, even though time and moisture have left their mark on them. Commenting on the skill of these photographers, particularly Johnston & Hoffman, Christopher Taylor, an English photographer based in France who had recorded the self-same areas and a lot more of Kolkata about 12 years ago with his clunking large format view camera and 4×5 inch sheet film, writes:

“Photographers were real craftsmen in those days, and it always surprises me to see how sharp the old image are, that even movement seems to be frozen despite the slow speed of photographic emulsions in those days.”

There is enough evidence of the civilising influence of the rulers in the images of Howrah Station with bullock carts and quaint-looking fleets of gas-guzzlers, the pontoon bridge across the Hooghly, Calcutta high court under construction, the beautiful Strand along the river where ships with masts and furled sails and country boats are anchored, the Eden Gardens with its artificial lakes and pagodas, children taking a joy ride on an electric train in the zoo, vistas of the Maidan and Esplanade with the Ochterlony Monument (today’s Shahid Minar) sticking out like a thumb, Clive Street (Netaji Subhas Road) that was Calcutta’s business hub, tony Old Court House Street next to Government House (Raj Bhavan now) which was once a shopper’s paradise before the Dead Letter Office with its highly visible campanile was constructed (shot in both 1860 and 1920’s), New Market with horse-drawn carriages waiting outside it, and the General Post Office dome dominating the skyline with the tranquil Laldighi in the foreground.. We see Writers’ Buildings before Ashley Eden, who was lieutenant-governor, gave it its familiar Neo-Renaissance look with touches of French in the mansard roofs in the 1870s. Many of these buildings are recognisable today, although BBD Bag has been disembowelled to build the Metro rail tunnel. 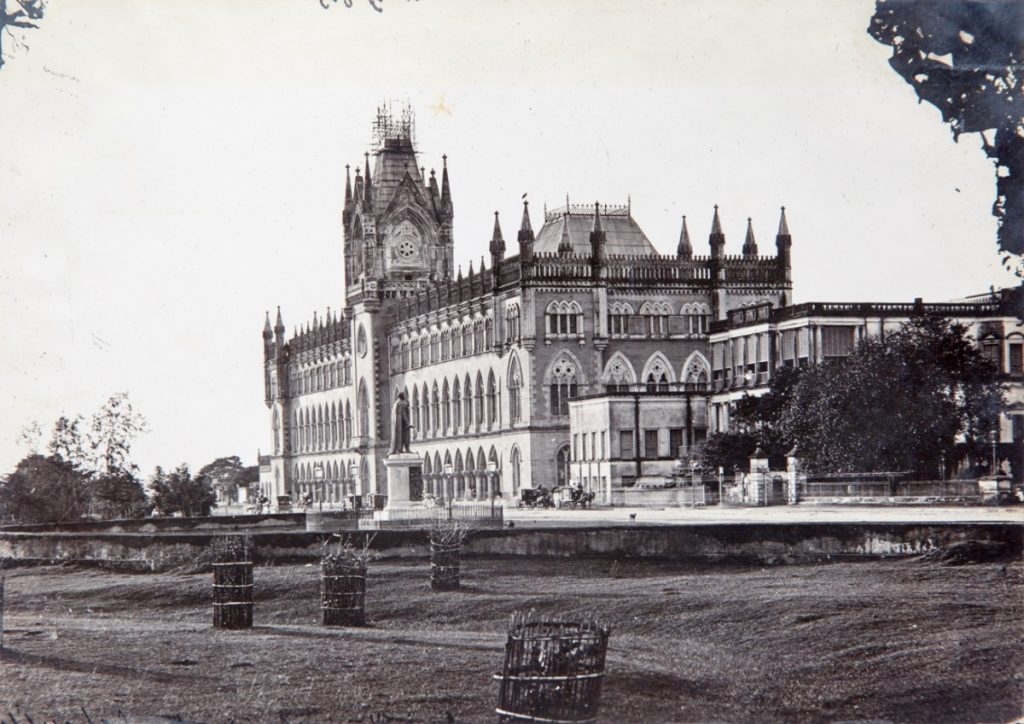 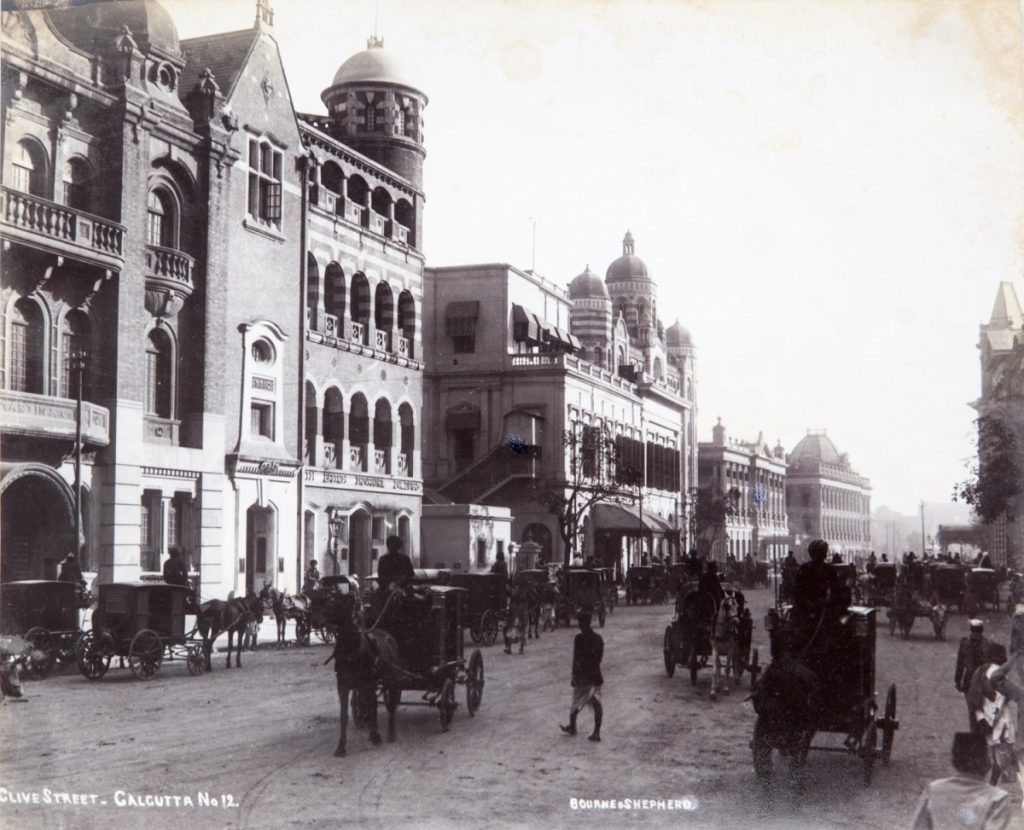 Bourne & Shepherd – Clive Street, once the business hub of Calcutta, with its magnificent buildings, most of which have survived. The mansard roof of Writers’ Buildings is visible in the distance.

Yet there are some images that stand out – the coolie standing outside the balustrade of Eden Gardens staring at the statue of a British bigwig erected inside it; the native servants inside the Alipore jail and the Calcutta Cricket Club; the palanquin bearers. If it weren’t for those Indians, this could have been London. 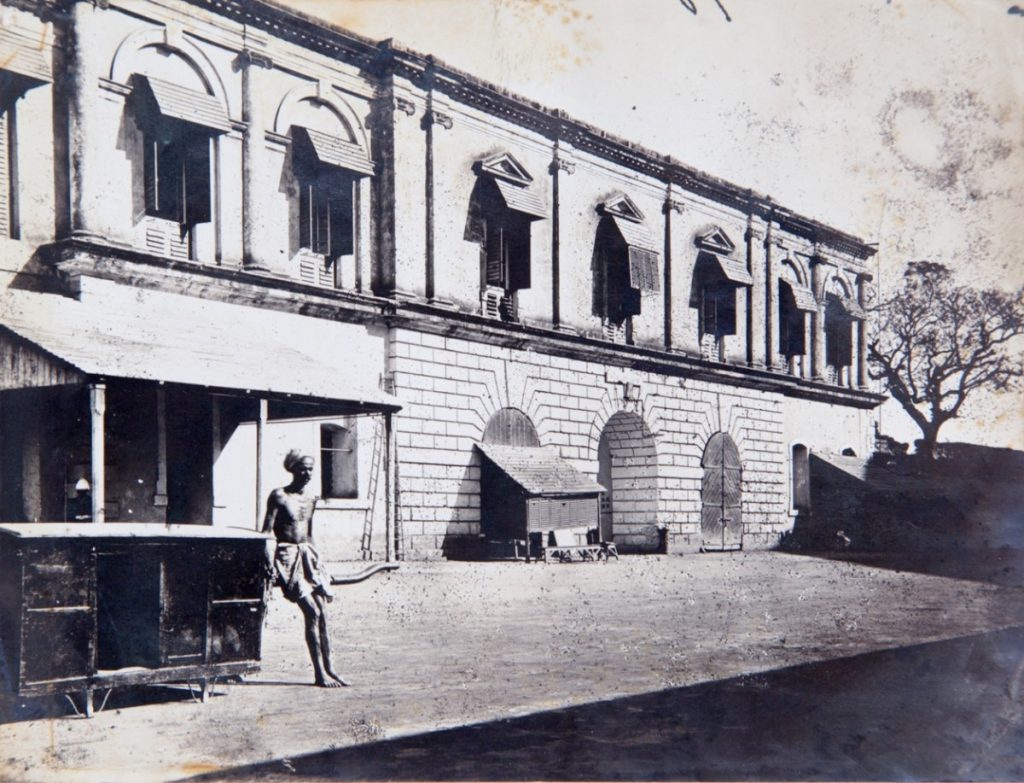 There is this remarkable shot of the Medical College Hospital in College Street taken from the Senate Hall before Asutosh building of Calcutta University was constructed. The foreground is crowded with neat pantile-roof huts. Horse carts were the road hogs of Harrison Road (Mahatma Gandhi Road) in Burrabazar and Chitpur Road (Rabindra Sarani), although a cyclist and the rear of a tram are discernible. The posters on the walls of a house in Kalighat are intriguing. 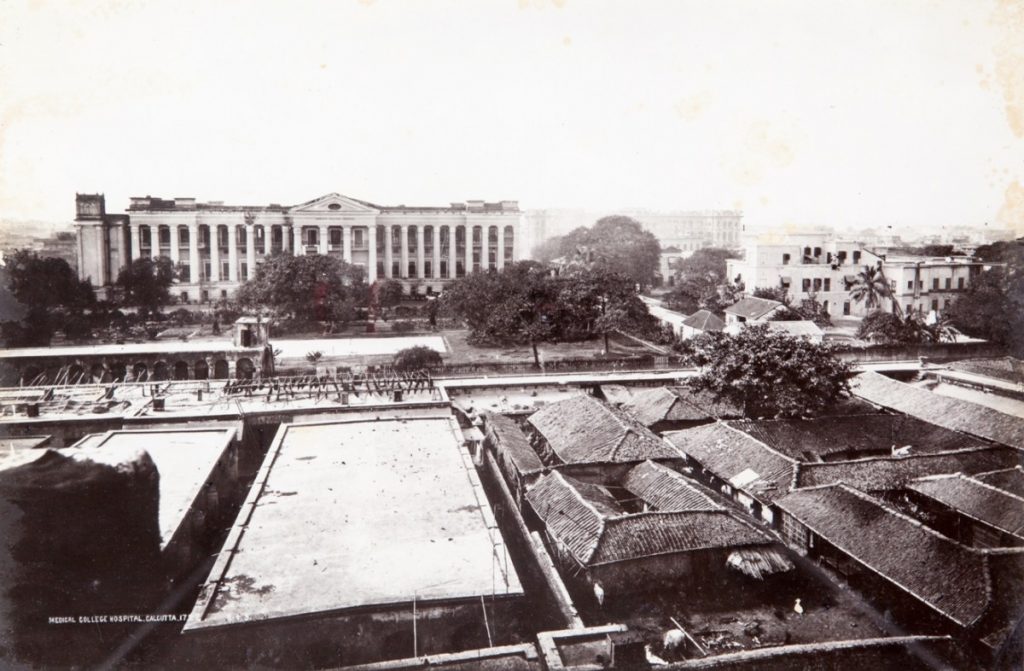 Bourne & Shepherd – Medical College Hospital before Asutosh Building of the University of Calcutta came up. A neat conglomeration of houses with pantile roofs occupies the foreground. College Street is visible on the left and in the distance are some mansions. The photograph was possibly taken from Senate Hall which was demolished in the early1960s.

There are two images with wrong captions. The colonnaded, isolated mansion described as a building inside the Medical College compound, is actually Serampore College set up by the Baptist missionaries, Carey, Marshman and Ward. And Gouranga Chattopadhyay, whose family once owned Rainey Castle in Ballygunge Circular Road, has ruled out the possibility of the building with turrets captioned as such, being so. Although in these cases it is difficult to arrive at the absolute truth. But are there more such glitches? 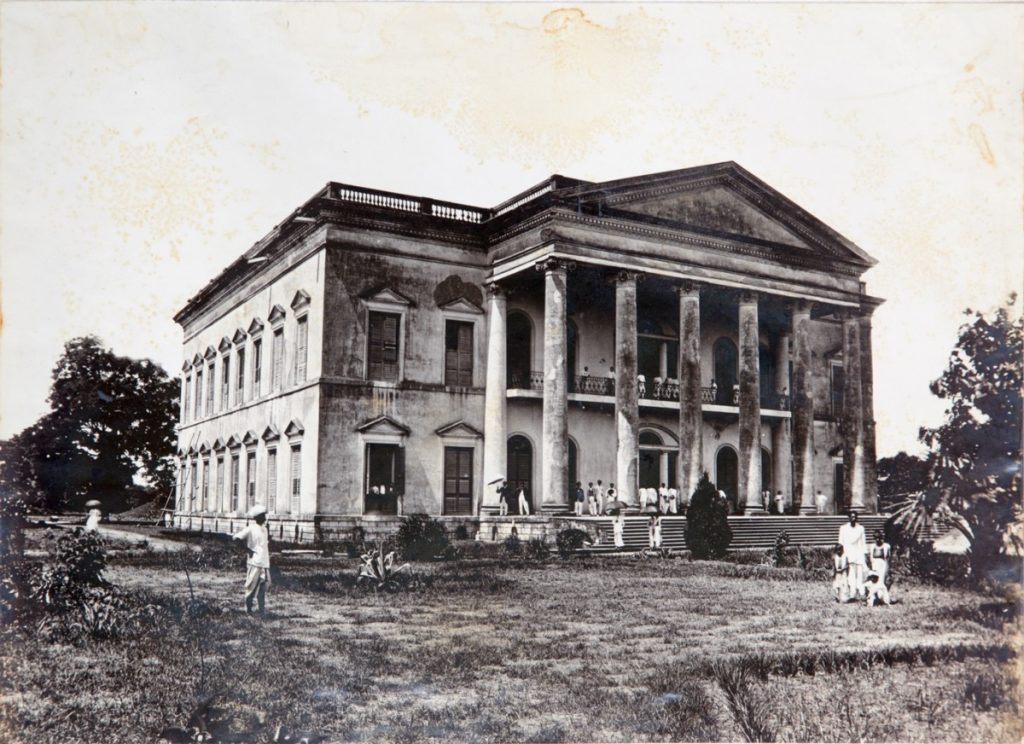 Johnston & Hoffman – Serampore College before other constructions came up near it, mistakenly identified as a building inside the Medical College Hospital compound in the exhibition. On the steps and the verandah are dhoti-clad Indian men. The two suited men stand out.

Images such as these feed into the nostalgia industry. The state government has no time for Kolkata’s built heritage and its long-term financial potentials. There are many who clamour for a piece of the heritage cake. However, those who have been seriously studying the city’s invaluable legacy for years such as P.T. Nair, Bunny Gupta, Debasis Bose, Indrajit Chaudhuri and Somnath Ghosh are rarely heard of. Yet the Bengali magazine, Harappa, edited by Saikat Mukherjee of Ranaghat, has dedicated its current issue entirely to various aspects of the history of photography in Bengal. Some young people still have the courage to hold their own. Exhibitions such as these make us wonder if we should not have taken a little more care about our legacy.

Soumitra Das, a Kolkata-based journalist, writes on culture and the city’s built heritage.